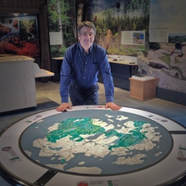 The Link Internship: Animas High School has a three week program in which students go into the professional world with a mentor for support. According to the students passion, they can select different careers to possibly obtain an internship in for three weeks in May.
Michael Kelly Design and Evaluation Services, Museums and Parks
Before I met Mike Kelly, I had emailed many AAA game companies looking for an internship. I heard back from a few companies, but because I was too young or they only had internships in summer. I heard no from every game company and even local software development companies. We had a fairly free range project in Chemistry, and I decided to create a  virtual reality game involving the future waste water treatment plant. At the exhibition, I ended up meeting Mike Kelly, who gave me his card and later offered me an internship. I started my internship about two months before LINK, which made me comfortable in the office environment by the time LINK started. I chose this opportunity because I liked my mentor's character as well as the projects he described. I hope to gain more social skills as well as verbalizing and explaining my thoughts. I hope to bring a strong programmer asset to the business as well as broaden exhibits to include video games. I hope to show other Animas students that they can achieve anything, especially with computers and the internet; anything is able to be self taught.
My Project:10001
I chose a simple story line to make my game, involving Animas High School as well as certain staff members. Video Games are quite hard to make, especially as a one person team. For this I had to do eight pages of a script, art,textures,environment,prefabs,3D modeling and of course programming in C#. I went into the internship with knowledge of Unity, C# and games design which all proved useful and advanced my internship quickly. While interning, my communication skills became much more professional and developed me into a more mature person. I also realized my personal motivation is very driven in video game design, and this is an important trait to keep. Coding can present many challenges and frustration in common among developers. There were a few days when I was incredibly frustrated and could not make simple scripts work. However, I persevered and made scripts work, leaving a sense of achievement. I'm important to the Design Company as I provide programming knowledge and expand the boundaries on what can be done. High School interns are worthwhile for mentors as it brings a sense of achievement to both parties, and expands knowledge through collaboration. Speaking with my mentor about my future daily and developing video games made me realize I don't want to program as my specific profession. I now know I want to become a game designer and most likely go to Academy of Art University in San Francisco to study and network to discover internship opportunity. I also plan to intern with a specific AAA game company as they have a specific summer program after graduation.
Chloe Walsh
Durango, CO
c.walsh19@animashighschool.com
(970)314-5507
Relevant experience
Independent game development
Work Experience
Sales Associate,Inland board house - Atlanta, GA                                 April 2014 to May 2015 Sales Associate, JCPenney - Durango, CO                                           May 2017 to June 2017 Ticket Sales, Purgatory Resort - Durango, CO                                      May 2017 to August 2017 Programming Intern,Michael Kelly Design - Durango, CO                    March 2018 - present Education
Animas High School - Durango, CO
Expected graduation- May 2019
GPA:3.2